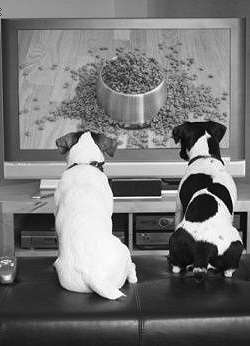 When the picture of dog food was displayed on the television, you as the owner of the dog did not hear any sound. The dog who was lying on the side of the dog suddenly and alertly put his ears up and kept his eyes on the screen. Obviously it was against this. The content of the advertisement is very interesting.

According to the British â€œMetropolisâ€ website, the pet food giant Nestle Purina recently launched a new TV ad specifically for dogs. The advertisement adopted the advice of an animal behavior expert. When advertising content was broadcast, only the advertisement was used. UHF tones that dogs can hear.

The company's nutrition experts point out that dog dogs are twice as sensitive as humans. They can hear humans and cannot hear sounds, and they are more able to distinguish sounds than humans.

Some analysts pointed out that NestlÃ©'s deliberately launching this high-frequency ad can be described as "intentional speculation": You see, dogs are raising their ears excitedly, as the owner of you, what are you waiting for, and quickly save money to purchase it.

It is reported that 12% of Nestle's profit comes from the sale of its pet food, and its subsidiary Purina Pet Foods alone achieved sales of 3.4 billion pounds in the first half of this year. In order to get the dogs happy and further expand their market share, the company also took all the stops. Last month, NestlÃ© stated that a new ice cream without lactose has been developed specifically for dogs.

In fact, businesses that specialize in advertising dogs are more than just NestlÃ©s. Last year, a British food company launched roadside billboards with dog and dog flavors. In 2001, the advertising of another company was even more ridiculous. The company actually put an advertisement with the smell of dog urine under the telephone pole.