The statue of Zhang Sanfeng in the museum is the Taoist holy land of our country and the legendary â€œXianshanâ€. Wudang Mountain has a strong Taoist culture and atmosphere, especially in the architectural group on the mountain. Wudang... 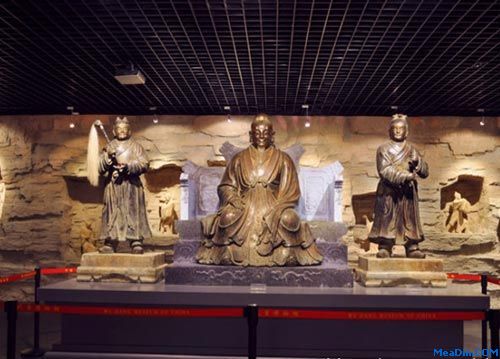 Statue of Zhang Sanfeng in the museum

As a Taoist holy land in our country and the legendary â€œXianshanâ€, Wudang Mountain has a strong Taoist culture and atmosphere, especially in the architectural groups on the mountain. Taiji Lake under the Wudang Mountain, the vast waves of smoke, swaying in the mountains of the mountains. The famous mountain wins the waterway for thousands of years. If you are like me, you don't know much about Taoism. Then, before you visit Wudang Taiji, I suggest you go to the Wudang Museum to do your homework. In this way, while enjoying the panoramic view of the holy waters of Xianshan, you can read the thickness of a mountain, the style of a lake, and the pleasure of your body and mind.

The Wudang Museum is on the cultural square of the Wudang Special Zone and faces the Wudang Mountain Theatre. The museum was opened in 2008 and is divided into three floors. There are 8 exhibition halls including Wudang Architecture, Xianshan Celebrities, Wudang Taoism, Taoist Statues, Wudang Palace Guandao Music, Wushu and Health, and Wudang Folk Customs.

The museum is free to open, no charge, but you need to submit a personal ID card and other relevant certificates when you enter. Otherwise, the staff is not allowed to enter, this is very strict.

There are nearly 420 pieces (sets) of royal treasures and royal gifts in the museum. Among them, Jinlong, Yuxi and Shanjian during the Ming Dynasty Emperor Jianwen were especially precious, which was the first demonstration. In addition, the museum also has nearly 2,000 pieces of cultural relics, 70% of which are national-level cultural relics.

In the exhibition design, the museum uses modern high-tech means such as sound, light and electricity, combined with the collection of cultural relics from various periods, and shows the profoundness of Wudang culture from various angles.

It takes about one and a half to two hours for the entire museum to be strolled around.